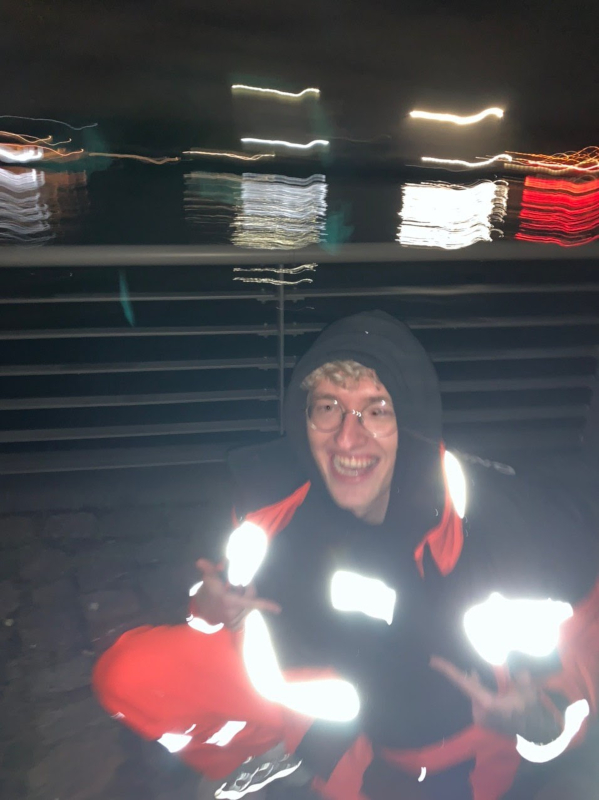 Music producer Nikita Nikitin, aka Cardiohud, was born in Transnistria, a post-USSR territory, before moving to Moscow at the age of eighteen to work as a software engineer.

It was around this time that Cardiohud developed his passion for electronic music.

I grew up with parents listening mainly to the mainstream bullshit that they were broadcasting on tv. Music never really excited me, until I started taking the breakdance classes. Music playing there was usually some sort of old school American hip-hop and breakbeat, we were learning to feel the groove and I reckon that’s how I developed a passion for syncopated rhythms.

Being in my early teens, we were getting together with friends at evenings listening to hip-hop and practising c-walk dance moves. We denied every type of music that was not American hip-hop. It was sort of a subculture. We tried to mimic the clothing style, the slang they used in songs, watching all the movies/documentaries we could put our hands-on, in our non-existent country.

Things changed for me after watching a movie called Hustle & Flow. I became very curious about how do these people create music. The next day I went to a shop and bought a CD with hip-hop ejay 4, that was my first take on creating music. It was indeed difficult for me to figure out all that stuff on my own, being 14 years old without knowing any English. But, trial and error, I moved over to hip-hop ejay 6, then have figured out how fruity loops work. slowly the picture of “how-to” become more clear.

I live in Berlin now. the scene is extremely diverse here. Without even looking at the Resident Advisor events list, there is a guarantee that you will find a party with great music. People I was listening to and thinking “oh my god this is genius” are playing here every weekend. Sometimes, checking out the events list, I hope that there will be no favourite artist playing this weekend, just a reason to stay home and make music – it never works out this way. I doubt the scene can be any better anywhere else. I almost never travel somewhere else for partying.

I use DAW primarily to create music. I have some hardware in my home studio: a few weird gears, but mostly groove boxes – but I only use these gears as a tool to synthesize sounds and then process it on the computer.

I heavily use software for creative processing, I love to twist the sounds in and out to get new exciting results – I have the total bundle from media productions, which is insanely good.

the DAW I use is called Bitwig – the best choice for sound designers. It has the features Ableton can dream about, like all sorts of different modulators that I can apply to external vst plugins or even to the hardware in my studio. Plus it has a built-in digital modular environment. sick stuff, quite buggy tho.

Sometimes I do hardware only jams, that I record and chop or process somehow afterwards. For that matter, I love using octatrack and analogue rhythm, together with a-8, processed by Elektron analogue heat.

My root music is hip-hop. I was listening to it for many years and went through all sorts of hip-hop: starting with gangsta rap, crank music, rapcore, dirty south moving towards mumble and emo-rap. At some point, the amount of these “Lil” and “Yungs” became overwhelming for me. The music started to sound to me exactly the same and I gave up on listening to hip-hop and making beats, until now.

At the moment I am heavily inspired by everything Lee Gamble is doing. everything I love has crossed together for me in his music. The same effect on me had A Guy Called Gerald, Burial, Jan Jelinek, Bjarki, Noer the Boy, Forest Drive West and some others.

I would say the genres that influence my music today the most are jungle, dub, ambient, techno and UK garage.

I have pretty weird relations with the internet nowadays. I am a software engineer, in the first place, and I love everything that’s about computers. I think I understand the power that the internet brings to us, I understand the importance of it in the modern world. The world would be a different place without it. But also I see what’s happening to our society: people living for likes and follows, trying to look different from what they are. I think we are drowning on the internet today, we are helpless without it. Internet services are fighting for stealing our attention for as much as they possibly can and they do it successfully. I learn to be a digital minimalist, sit less at the phone, only use it when needed.

Though, with technology developing, more new cool perspectives appear. A friend of mine is running a network of servers collecting the images over the internet. Then this data is fed to a neural network that generates various images. I think the same can be done with music, soon AI will be competing with us in creating music. This is exciting, but also a bit scary.

Success to me is the ability to be free when creating. Share the work with like-minded people. Collaborate on the art projects of various disciplines.

For me it’s all about art. Maybe I am naive, but I don’t set goals to become financially successful with music  – for me music is a medium which I can express myself through.

What has been a memorable highlight of your career so far?
I would highlight a soundtrack I made, for an exhibition of generative art, that my friend’s hosted in Berlin. It was indeed an interesting challenge for me because I’ve made the whole soundtrack in a pretty short time. The idea behind the project was the computer-generated art, so I decided to use the digital modular environments and try to make the music “generative”. I played with note probabilities, midi trigger chances, randomness and other methods to make the synthesizers create music for me. On that project, I also managed to work with a great mezzo-soprano singer – Rebecca Jo Loeb. You can find the soundtrack here –

I’d like to work with Lee Gamble. I think I would learn a lot from him. His music conveys a feeling you get at the peak of a techno rave in a sweaty basement through the medium of dub and ambient music. Woah. not only this, he is a great storyteller. Telling a story with music is very important. It’s a freedom of exploration, playing with form.

To me, his music conveys a sense of nothingness, imperceptible mood. This is something I am really inspired by. I also saw him at Atonal this year, performing live. I went home jawless.

I would still be sticking around something creative somehow. Engineering some weird software, taking analogue pictures, making generative visual art, doing typography. I still want to do all of that, but currently I am focused on music.

I am in the process of searching and defining my personal style. I spend virtually all of my spare time behind a monitor tweaking knobs, figuring out what is it that I would like to share with people. But I am planning on doing more releases in the upcoming years because I feel more confident with the music I am producing today.

The city of Los Angeles always sounded like the place to thrive as a creative, and music producer Skyler Madison ...

Set to release her debut EP Dream Theory via Monstercat in the coming weeks, music producer Oblvyn is humbled by ...

Set to release his debut album in the weeks to come via Seeking Blue Records, music producer Vanic has been ...